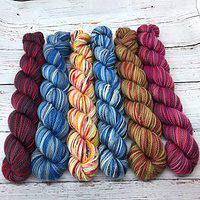 The Walking Dead is very compelling television! No matter what the Zombie world throws at Rick and his band of merry living folk, they seem to scoot by with less loss of life than any of us ever expect. I love this series, and the more I think about it, what really excites me are the performances by the entire cast. It’s rare that I’ve felt so personally invested in characters on a show!

Glenn is the best. Period.

Glenn is positive, upbeat, a kick-ass defender but still very humble at the same time. Maggie is one lucky woman.

He may have been a simple delivery boy pre-outbreak, but now Glenn’s the soul of Rick’s band of merry folk.

Glenn doesn’t act out of pride, he acts out of LOVE and compassion. Glenn is amazing.

Our new Glenn Rhee color is a faded red (for his ubiquitous baseball cap) and a deep black (for his ink-dark hair) mixed in a dependably repeating color (be forewarned, it will either stripe or pool, depending on how it’s worked up)

I don’t need you to protect me anymore! I can take care of myself.”

Carl Grimes grows up before our eyes, with the intensity of adolescence and

an emotional depth far beyond his years, Carl lost any small piece of innocence he may have retained when he took it upon himself to shoot his mother after she died in childbirth.

At this point Carl is a sharp mix of strength and weakness, bravado and fear, not yet developing the subtlety that often comes with age. Carl sees things starkly, which is only to be expected by a child carrying the weight of a man as the world seems to end.

Carl Grimes is the iconic blue jean mixed with a strong black and white and touches of red.

“If he was here right now, I’d cut him in two, because that’s how it needs to be.“

More than any other character, the persona of Michonne was created by the zombie apocalypse.

Her fire, passion, skill and drive to survive cannot be quenched, even by the deaths of her most beloved family and separation from every friend she’s made since the world went mad.

We’ve seen a tiny bit of Michonne’s past life, and now it’s understandable that it took a full season before we ever saw her crack a smile —what was there to smile about?

Michonne is a rich, vibrant blend of pinks, purple and reds over a base of deep brown, reflecting her passion (both in terms of intense emotion and intense suffering)

Sherlock can joke about being a highly functioning sociopath, but Phillip Blake (The Governor) is the real deal.

Motivated by a lust for power, which often trumps his secondary motivation to protect those whom he considers “his”, The Governor is an interesting portrayal of the type of man who emerges at the head of totalitarian regimes throughout history.

The fact that he can present vastly different sides of himself, chameleon-like, depending on what is required at the moment makes him one of the more interesting (if repulsive) characters in The Walking Dead.

The Governor is the most diverse mix of colors in the The Knitting Dead series, reds, yellows, pinks and greys stand out against a black/white background.

“I just want my brother back.“

Daryl’s the quiet muscle, the thinking wo/man’s redneck, and he’s proven to be

a better friend, defender and father-figure than almost anyone else on the show.

Where his brother, Merle, was indignant and cruelly bossy, Daryl is slow to pass judgement. He is fully present at every moment he’s on screen (and remains vital to the action when he’s off screen.)

Daryl Dixon a neutral camo green/tan, with strong blood & gore red/brown overtones and just a bit of gold shining through.

“You pull the trigger, you have to mean it.“

Officer Rick Grimes, Sheriff Deputy, is the authority figure, the decider, the

one who – for better or for worse – most folks turn to within his group for guidance.

Rick has the power to decide where the group goes, who stays within the group, and who is banished to the zombieverse outside of his charmed circle.

Rick can pass his hat on to Carl, he can try to deny that he is the power, but he retains the aura of Officer Grimes to everyone within his group.

Officer Grimes is a blend of the beautiful blue of his Georgia patrol car; the deep, rich brown of his iconic hat, the warm tan of his uniform with just a touch of creamy white.